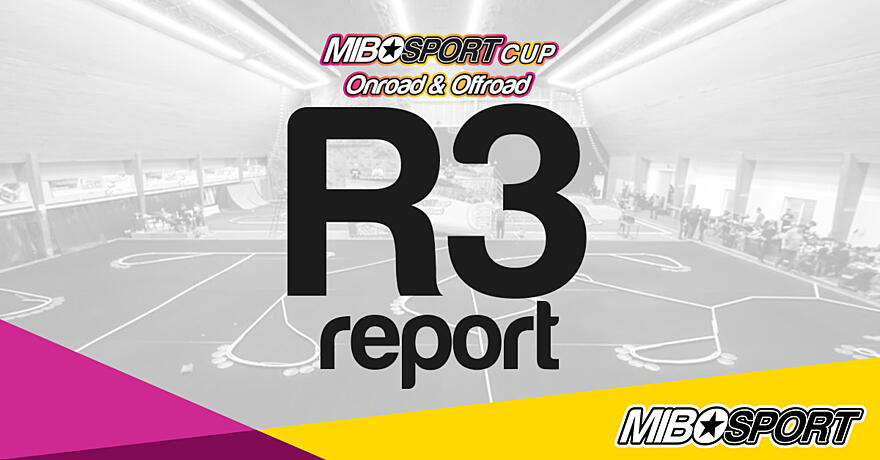 Third round of Mibosport Cup divided the 2019/2020 season in Hrotovice into two halves and it was the last race of the year 2019 as well. The date came directly for the second Advent weekend. The Christmas atmosphere was gradually getting stronger and brought some traction problems as well. Fortunately, this was not the case on the racetrack, but mainly on roads around, which were more like an ice-skating rink after Friday's rain.

Despite the incoming holiday and some winter weather around, more than two hundred of driver had come to Hrotovice's hall. Even though the group of British drivers decided to stay at home for now, we had another farther participants as Danish guys made their way into Czech Republic.

Both the onroad & offroad tracks were ready on Friday so the free practice starting at 4PM could be kicked off with no issues. The grip level was enormous (what can not be said about the situation outside the hall) so there was a space to improve setup somehow to adapt to conditions.

Buggy 2WD Stock: Tristram Neal, developer of Schumacher racing cars from Great Britain, showed that he is not only great at thinking about cars. He can drive them as well. And very fast, because he won this class by a margin. Hannes Mayer ended up as second and Jura Hudy finished third.

Buggy 2WD Modified: Michal Orlowski passed another victory to Schumacher. Being fastest in A1, A2 & A3 brought him on the top spot of the podium. Martin Bayer did the same style, just with second place and Max Götzl completed the TOP3. Hupo Hönigl finished fourth and Bartolomiej Zambrzycki was fifth.

Buggy 4WD Modified: Another buggy class. This time with both suspensions powered. Performing some flawless runs, Michal Orlowski dominated again. Martin Bayer became a runner up and Max Götzl with Hupo Hönigl switched their positions. Hupo finished third and Max had to satisfy himself with the fourth spot. Adam Iszay finished fifth.

GT Stock 17.5T: Absence of Ales Pelikan, who won two previous rounds, gave others the chance to reach first victory in the class. Ivo Gombik had TQ, but Günter Krausgruber was just faster in finals. Ivo finished second at the end and Dominik Stangl ended up as third.

FWD: Alexander Mayer reached the victory for the second time in 2019/2020 season. Werner Spannbruckner was really a fellow to fight with. However, some driver errors cost him more than a chance to stand on the top spot as he finished fourth. Michal Bok meanwhile pushed himself up to the second in front of Roman Fiby. Marcel Dostal completed the TOP5.

Formula: This class promised nice fights as the competition is very high here. Andreas Stiebler claimed TQ spot for finals and somehow, he maintained it till the end of finals. But behind him a lot of things happened. Lukas Hoch moved to the second in front of Thomas Dvorszky. David Ehrbar finished fourth and Werner Spannbruckner did well as he came up with fifth position.

Pro Stock: Radko Cernohous did a brilliant job and despite Friday´s practise absence he took TQ and overall victory. Simon Horak was too far to compete with him, so he had to settle for the second position. Karel Kratochvil finished third. Jan Gehrig had shown up in Hrotovice after a long time period finishing fourth and Marton Toth finished fifth.

Modified: Matej Sulc proved his role of race favourite and showed just a rear part of his car to the others. Mads Koue, driving all the way from Denmark, ended up with a nice second place right in front of Kuba Simurda. Brano Panak was another surprise as he finished fourth and Petr Grof completed the TOP5.